It’s my annual “Taxes from A to Z” series! If you’re wondering whether you can claim wardrobe expenses or whether to deduct a capital loss, you won’t want to miss it.

F is for Fat Finger Error.

Admit it: you knew what a fat finger error was before you even clicked over to this article. Chances are, you’ve made a fat finger error or two yourself on your smartphone, iPad or laptop. In investment markets, the term is used to describe an incorrect order – usually because of a slip up at the keyboard. In the tax and financial world, the term simply means an error caused by hitting the wrong key on your keyboard or by otherwise making a mistake when entering a number (for example, hitting an extra number).

There have been a few infamous fat finger error moments. In 2014, Japan’s stock markets took a beating after what was assumed to be a fat finger error. An anonymous broker put in an order for 42 stocks worth more than $600 billion (with a b) before canceling them just after. The biggest order was for 1.96 billion shares (yes, again with a b) of Toyota Motors.

The following year, a junior banker at Deutsche Bank – whose boss was on vacation at the time – accidentally wired $6 billion to a U.S. hedge fund customer. Fortunately for the bank, the money was returned the next day.
Believe it or not, the Internal Revenue Service (IRS) cites a number of fat finger type errors when it comes to filing your taxes. Mistakes can be as easy as transposing a Social Security number, entering the wrong routing numbers for direct deposit or entering the wrong dollar amount. The best way to avoid a fat finger error? Take your time when filing your tax return and check – and then double-check – those numbers.

For more Taxes A to Z, check out: 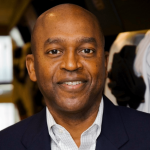 Getting To Know You Tuesday: Jonathan Mariner

In Search Of Votes, GOP Makes Changes To Plan To Repeal & Replace Obamacare