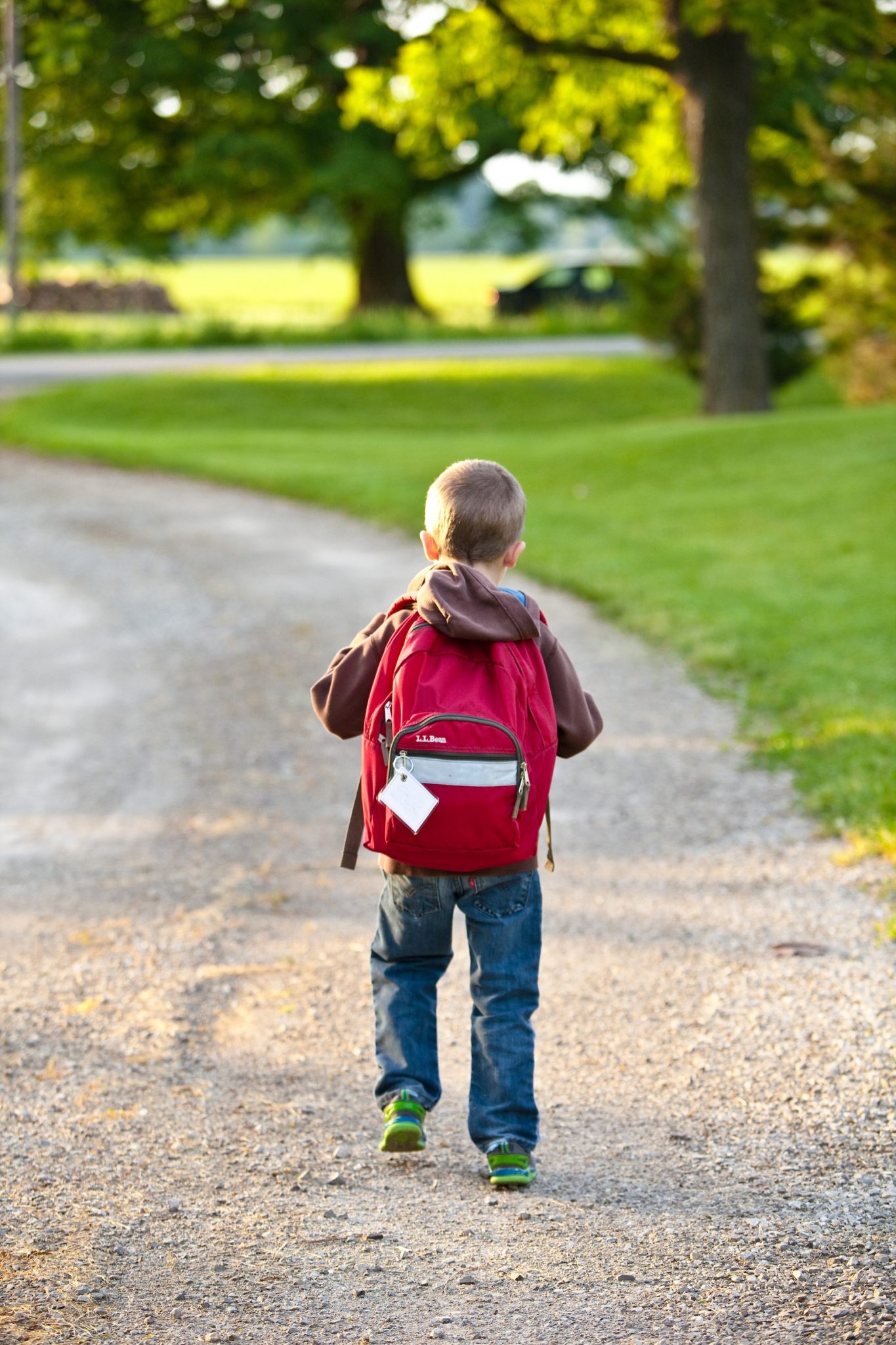 I’ve been trying to plan a quick bite with a friend for a few weeks now. The snafu? My kids, who live in Pennsylvania, started school last week while her kids, who live in New Jersey, won’t begin until the end of this week. Coordinating anything this close to back-to-school is necessarily complicated. Sports practices and back to school nights on my end are dovetailed in between back-to-school shopping and last gasps of summer on her end. It’s a dance that many parents engage in around this time of year. And while some school start dates are a little earlier in summer and some a little later, most use a single weekend as the divider: Labor Day.

In years past, school open and closing dates have varied depending on whether the school was located in a hot or cool climate, or an urban versus rural state. In urban areas, schools could run year-round, while in rural areas, schools traditionally opened after Labor Day and closed in mid-spring; the latter schedule allowed farms to operate on schedule without the need to pull kids out of school. As our country has become less agrarian, calendars across the country have shifted, but the reason likely still comes down to economics.

In many states, including Maryland, Michigan, Minnesota, Ohio, and Virginia, state and local school districts have rules in place to make summer to last a little longer. In Maryland, for example, state law requires all Maryland kindergarten through grade 12 public schools to open “no earlier than the Tuesday immediately following the nationally observed Labor Day holiday” (order opens as a PDF).

Legislatures and school boards can be cagey about the reasoning behind school schedules, often citing student engagement and family values. But in some states, like Virginia, they’re rather transparent: the 1986 law that requires schools to seek a waiver to open before Labor Day is referred to as the Kings Dominion law. Kings Dominion is a large amusement park located between Richmond and Washington, D.C., that’s been a fixture in the state since the 1970s. It’s a favorite summer spot for families (even this North Carolina girl went as a baby) so it’s not surprising that, as a symbol of tourism and the hospitality industry, it would be associated with a law intended to boost vacation spending at the end of summer.

Repeated challenges to the law in Virginia have failed. In 2014, a push to change the law faced clear opposition from then-Governor Terry McAuliffe who indicated he would not be inclined to support a change, saying, “I’m very concerned about the tourism issue.” An effort to change the law earlier this year ended by kicking the can down the road: they’ll take it up again next year.

In Maryland, legislative efforts to change school calendars have been mixed. Maryland’s Comptroller, Peter Franchot, had encouraged state residents to support a post-Labor Day start date, noting it would bring an extra $7.7 million in additional tax revenue. In 2016, Governor Larry Hogan issued an executive order delaying the start of school until after Labor Day. His spokesperson said, in response to criticisms, “The order doesn’t change the number of days students are in class.” Nonetheless, a bill which would allow schools to extend the school year by five days without a waiver passed earlier this year but the new law does not affect the start date.

Katie Hellebush, the director of government relations for the Virginia Hospitality and Travel Association (VHTA) in 2012, also justified efforts to start school after Labor Day, saying, “We have conducted studies, and we do anticipate that there would be a significant loss in terms of $369 million, which would include more than $104 million in wages and benefits lost.” That loss of revenue includes not tourist dollars, but dollars (and tax dollars) targeted to teen jobs. Hellebush noted that while tourist dollars suffer with an earlier school start date, education test scores did not decline with a later school start date.

Michigan also touts tourism as the reason for a later start date. In 2012, the Michigan Lodging and Tourism Association (MLTA) reported that tourism dollars have increased each year since a new school start date policy took effect in 2006. Nonetheless, a record number of schools requested waivers to start early in 2017.

In Minnesota, a University of Minnesota Tourism Center study found a pre-Labor Day school start date decreases the chances by 50% that families will take a trip in August or September. And at the State Fair – which runs late August through Labor Day – officials expect a drop in attendance if more schools start in August. Dan McElroy, President & CEO at Hospitality Minnesota, echoed the call in 2013 to keep start dates late, saying, “It is highly disruptive to the economy to go away from that tradition.”

In my state of Pennsylvania, a 2006 push to make school start dates later failed. In a state heavily dependent on travel and tourism (it generates more than $40 billion each year and supports nearly half a million jobs), a later school start date should equal more revenue. A 2013 study found that Pennsylvania would benefit by $378 million in direct net revenue from moving the school start date to after Labor Day.

But would the move be worth it? States that bank on tourist dollars and related tax revenues say yes. In Pennsylvania, the state’s travel and tourism industry generated an estimated $4.4 billion in state and local taxes and $4.5 billion in federal taxes in 2015 (report downloads as a pdf). Those tax dollars are used to fund education and other programs that benefit families. Cutting short the opportunity for more tourism, the argument goes, means fewer tourist dollars and therefore, fewer tax dollars.

However, educators argue that a shorter school year is bad for students and encourages the so-called “summer slide” when some students show a drop in achievement after the summer break. Not everyone is convinced that it makes a difference. A study conducted by Johns Hopkins sociology professor Karl Alexander suggests that low-income students suffer the most in summer but “simply keeping students in school longer is not the key.”

Educators argue that moving the school start date up would boost test scores and student achievement. But at least one district that made the move to a later start date didn’t find that to be the case. In 2013, Minneapolis Public Schools moved its start date to the week before Labor Day, hoping it would have a positive impact on student achievement, but the district was not able to make a direct correlation between the two. Today, Minnesota’s school calendar law assumes that most regular public schools will not begin classes until after Labor Day. Opponents of a later start date note that the overall number of instructional days for the year doesn’t change by pushing the date forward: It simply extends the date for the last day of school. That’s true for my friend in New Jersey. While my kids hope to be out on June 7 (depending on which almanac gets the snow forecast correct this year), her kids have a June 22 stop date.

Some fear that starting school earlier might be a trend towards eating up summer altogether. “Summer creep” is a concern in some families, especially those that depend on seasonal work and summer business to boost household income. And for some families, summer is the only narrow window in which to schedule a vacation (Americans already tend to leave vacations time on the table). Maryland’s Franchot hinted at such, saying, “My major concern is the quality of interaction between families and their kids, which is jeopardized by this creep of starting school earlier and earlier. If we keep going in that direction, it will be July when we start school.” Nancy Marscheider, the executive director of the Virginia Beach Hotel-Motel Association and a mother of two, agrees, saying, “Besides the very real negative economic impact that starting schools before Labor Day would have on our industry, as a parent of two children enrolled in the Virginia Beach school system, I definitely would not like to see their summer cut short.”

So which strategy is best? Are the increased tax dollars worth a delayed start to the school year? Should the end summer last a little longer? The underlying issues may be up for debate, but the question is settled for now, practically speaking: By this time tomorrow, most public school children in the U.S. will be back in school.

Expecting A Refund Of College Tuition And Fees? Here’s What You Need To Know