The Treasury claims to have sent out nearly 30 million payments totaling $27.2 billion so far – though it’s clear from the comments that most of my readers haven’t seen their checks so far. And the White House believes that those payments will make a difference in the long run.

President Bush’s Deputy Press Secretary Tony Fratto has said, “It will boost the economy – it’s impossible that it won’t. It’s like saying if I pour water into a cup, will it get wet?”

Um, I’m not sure what that’s even supposed to mean.

What most people do agree on, however, is that the money will likely be spent. However, less than a quarter of those polled said that they would spend the money on something that they need or want, which was supposed to be the point. Nearly half will use the money to pay down existing debt. The remainder claim that they will put the money away for a rainy day.

What’s likely to take a large chunk of spending? Gas. Gas reached a record high last week, hitting $3.67 a gallon. And what else? Food. I can totally understand the latter – a small trip to the grocery store this weekend to “top up” our pantry cost nearly $100.

I’ve asked before – but in light of recent gas prices and this poll, I’m asking again – what are you spending your rebate money on (assuming that you ever get it)? 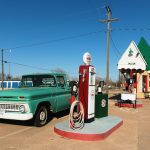 Who Gets The Gas Face?